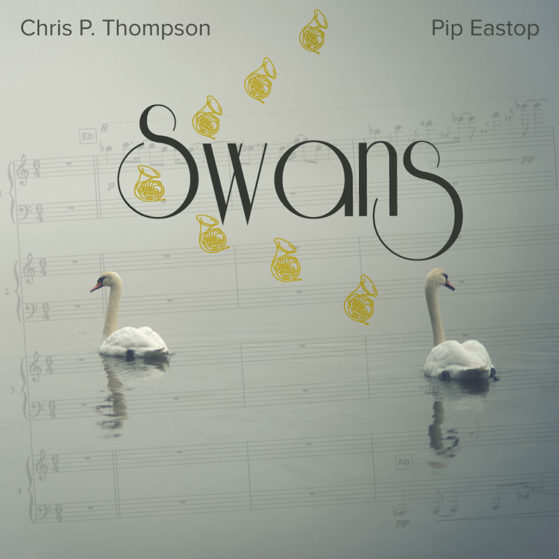 This work is unusual in that I have taken a perfectly excellent piano piece, written by composer Chris P. Thompson, and added seven horn parts. Why do such a thing? Simply because I love the piece so much that I couldn’t stop myself. I confess to being a pianophile. I love pianos, piano music and listening to recordings of them and playing them myself – and the piece in question is a really good one and in some ways quite unique.

During the long months of the lockdown, while in the process of working out how to make multitrack recordings of myself playing the horn in the comfort and privacy of my garden shed, I was reading about virtual pianos and in particular one called “Hammersmith” created by Soniccouture. On their blog I found an interview with composer Chris P. Thompson. What caught my attention was that he had been altering the default tuning of the Hammersmith virtual piano in a very interesting way; he was using the frequency ratios of the harmonic series rather than our normal chromatic semitone steps. Intrigued, I followed a link to an album of his on Spotify and became immediately mesmerised by his unique style and the flavour of his superb compositions. You can hear the original version (without horns) of this amazing piece on Spotify

The harmonic series is always with us in any music we hear. It is in the tone of our voices and even in the squeaks of chairs and the whistling of the wind, although usually it is somewhat disguised so that we don’t notice it. In a similar way all the colours revealed by a rainbow are present in normal sunshine but we don’t notice them unless they are separated, refracted. Likewise with the harmonic series, whose sequence of tones, when revealed, seem strange to us and are hardly ever used in western musical culture. Instead we have settled for equal temperament, a very clever modern solution to the problem of getting fifths and octaves to play together nicely in all keys and for unifying semitones across all twelve keys. ET works very well but it is most definitely not the only way that notes can be tuned.

Horn players know the harmonic series because it is our bread and butter, our raw material, and is at the very heart of how our instruments work. All the notes of a horn are steps in one harmonic series or another. Thus, for me, hearing pianos tuned like this for the first time was an exciting revelation. Pianos speaking in fluent Horn – how marvellous! I listened many times over to the whole of Chris P. Thompson’s album, delighting in the curious tonalities, all new to my ears in the context of piano music, but yet so compellingly familiar to the horn player in me. For many listeners this unusual tuning may sound simply “out of tune”, or at least quite weird. This is because equal temperament is now ubiquitous worldwide and opportunities to hear the curious notes of the harmonic series, revealed explicitly, are rare.

I was so excited to hear pianos tuned in this way that I just could not resist playing along, matching the notes of my horn to these amazing compositions. The affinity was striking and I found all kinds of interesting things to play and I soon began to wonder if it might be practical to add some multi-tracked recorded layers of horn to one of the pieces to see how it might turn out. I got in touch with Chris P. Thompson and after an exchange of several emails, in which I declared my enthusiasm about the intonation matching between his pianos and my horns, he was kind enough and intrigued enough to send me high-resolution copies of some of his works to play around with.

After some experimentation I found I had multiple horn lines, grouped in differently spaced positions. It took a while to decide the final layout but eventually I settled on seven horn parts. There are four in a centred “horn section”, more or less in the vicinity of the piano, which only play together as an ensemble group, rather like an orchestral horn section. Then there are two independent parts for natural horns which are positioned at the far back of the sound-stage, one to each side. The one on the left is in Ab and the one on the right is in low C*. These two parts are there to provide a bit of slap, sizzle and spatial depth and to connect with those specific harmonic series used by the harmonics-tuned pianos.

At some point the swans theme from Sibelius’ 5th symphony appeared. I’m not quite sure how this happened since I was committed to deriving all of the horn elements from the rich thematic material already existing in the piano parts, but I love that moment so much that after it invaded my composing process I couldn’t resist leaving it there.

“Today I saw 16 swans. God, what beauty! They circled over me for a long time. Disappeared into the solar haze like a silver ribbon.” Jean Sibelius.

With this theme came the imagery of swans and from there it was but a small step to trying to create a musical impression of a crowd of them together, feeding. The feeding frenzy happens at 6’ 20” into the piece. I have no real idea how swans really sound when feeding in a flock but I just wanted to create a musical impression of a swan honk-fest.