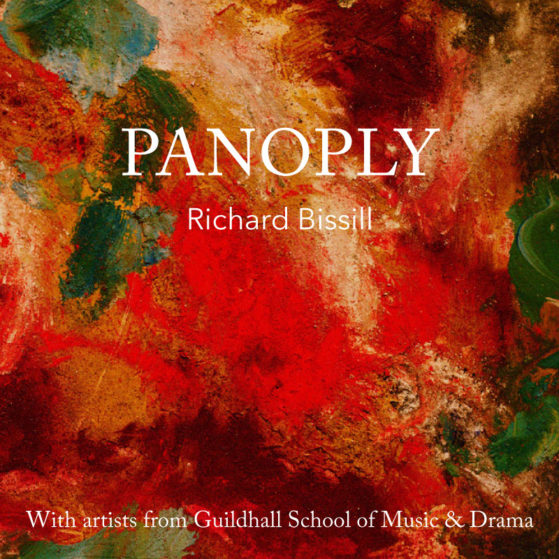 Available to order on CD from the Three Worlds store 123

With artists from Guildhall School of Music & Drama

‘The idea for this CD germinated in 2018 as a project to record some of my compositions that would feature the wonderful students and professors who have been connected with the Guildhall School over the years as well as providing a valuable recording experience for the current students involved. The recordings began in March 2019 and finished a year later. The final piece is especially significant as it was recorded on March 15, 2020 exactly one day before the entire classical music scene was shut down by the coronavirus. We squeezed the recording in by the skin of our teeth and I still can’t quite believe we did it!

I’d like to express my gratitude to everyone involved with this project including Jo Hensel, the wonderful Guildhall AV department and all the amazing artists who helped to bring my music to life. I must also send my heartfelt thanks to the donor, who wishes to remain anonymous, without whom the making of this recording would not have been possible.

Commissioned by the London Philharmonic Orchestra.

Commissioned in its original version for violin and four harps by the
Royal Academy of Music harp department.

Sirens: The Siren motif – a descending 3-note sigh – calls out plaintively. This transforms into the main theme – exotic, sensual, curling and simply stated. The violin becomes restless as the piano joins in jerkily before again relaxing and entwining. The violin soars high above the gently pulsing piano before disjointed references lead to frantic swirling as the violin arches onwards and the music tumbles forwards.

Trilling octave leaps cascade down to the final section where this time the opening 3-note motif is transformed into a tarantella. The music trips along, eventually reaching a grand E major restatement of the main theme, sung broadly over the decorative, dancing accompaniment. The violin slides up and down manically as the music charges on. The 3 notes call out again insistently, signalling that the end is here.

Commissioned by the Royal Academy of Music bassoon department.

1: a sonorous, ferocious introduction gives way to a playful scherzando. Quick fingers and an agile tongue are on display as the movement jazzily trips along. The opening returns and winds down to the close.

2: is based on a chromatically descending dotted theme which appears in various guises throughout. 2 bassoons sigh sadly together in the upper reaches as others join in. Giant chords proceed in a stately fashion. A quicker section builds to a glorious climax where still the descending theme, now stretched even further, gradually falls away to end quietly.

3: the 1st bassoon almost as a cadenza freely announces the main theme. The others set up a 6/8 groove and in comes the theme, now slinkily snaking its way in and out. Unison rises and falls and an ostinato bass usher in a jazzy counter theme. The music rolls along with all ideas interacting. A reminder of the sonorous first movement introduction brings the piece to its big finish.

Commissioned by the Royal Academy of Music harp department

Twisted Elegy is based on an ascending ten-note sequence which is introduced by the viola and passed around throughout the first dreamy section. These ten notes are transformed into the theme of the next faster section, marked agitato. The note sequence is scattered and developed, the music becoming increasingly lush until it fades away and comes to rest at a gentler pastoral section. The agitato idea slowly starts up again and the piece drives ever intensely towards the close.

The trio starts cheerily with the horn and violin passing the theme between them in keys that momentarily settle. A change of gear from the piano announces a snappy scherzando, putting to one side the smooth pastorale of the opening. The music becomes ever impassioned before, in unison, the horn and violin protest the need to rest. Tentatively the piano recalls the opening theme as the horn and violin comment lugubriously. Fully recovered, the main theme then gradually builds, scampering and lunging, to its inevitable peak. Once again the horn and violin signal in unison to stop. This time the piano takes time to crank the music back up, leading to a final, joyful 6/8 finish.

Commissioned by the Royal Academy of Music harp department

This piece, yet another RAM commission, was supposed to be for flute and harp but it soon became apparent that one harpist would need 4 feet to play it so rather than compromising my writing style I added another harp part. Later on I made this version for flute and piano. The first movement is a breathless conversation between the flute and piano featuring scurrying sextuplet figures.

The second movement starts off more relaxed and languid, allowing the flute to weave spells between skittish outbursts before racing almost out of control to the flippant coda. The third movement starts with a grand cadenza, tentatively introducing the main theme which itself then gradually transforms into a somewhat diabolical scherzo which the piano tries its best to counter with sweeter musical interludes. The music grinds down to the final flourish.

The Magnificent Seventh for eight horns, piano, bass and drums (2012)

Horn players around the world are aware of the 48 Etudes by Verne Reynolds. Number 19 deals with the interval of a minor 7th and it is the first bar of this study that provided the inspiration for my piece. A strident opening introduces the motif of two rising minor 7ths, a minor 3rd apart. This motif is passed around and mixed up before settling into a playful 6/8 melody. The music then unfolds, throwing in mixed meters, before sequentially climaxing to the end of the first section where the piano collapses and rises to stillness. The middle section theme is moodily revealed by the solo piano. The horns interweave their florid lines and play smoochily as the piano cocktails over the top. The horns build the theme, dragging lazily, big band style, under the piano’s insistent decoration, growing ever more luxuriant until inevitably the whole ensemble erupts briefly before subsiding and leaving the piano to finish off calmly. The minor 7ths are reintroduced and the music takes off again, dancing back through the mixed meters to the coda where the middle section theme returns to propel the piece to its triumphant end.

Available to order on CD from the Three Worlds store