What a wonderful glow there is in the sound of the French horn. But it takes real courage to specialise in the instrument, for the horn is a beautiful but awesomely temperamental beast to master, ever ready to crack and send your notes splitting in all directions like shattered glass.

But Jim Rattigan is not only a master of the instrument, with a wealth of classical and studio experience, he has achieved the even greater distinction of becoming a fluent improviser in the jazz world. And he is an extraordinarily gifted composer and arranger too. He is currently on a UK tour with his large ensemble Pavillon, and their concert at the Royal Birmingham Conservatoire’s Eastside Jazz Club was a triumph. (The title of the group, by the way, comes from the French word for the instrument’s bell.)

The inclusion of the French horn in jazz groups, though rare, goes back a long way: starting with the Claude Thornhill Orchestra and also the work of Julius Watkins in the Ernie Fields Band in the early 1940s; then the playing of Willie Ruff with Lionel Hampton; and in game-changing style the writing of Gil Evans for the classic Birth Of The Cool recordings by the Miles Davis Nonet. Composer Gunther Schuller – who was a horn player on some of those nonet recordings – further developed the use of the instrument in his own “third stream” creations. In later years, Mike Gibbs used the horn in some of his orchestra line-ups, but the instrument has largely remained a jazz rarity.

Rattigan’s work puts the French horn firmly back on the jazz map. 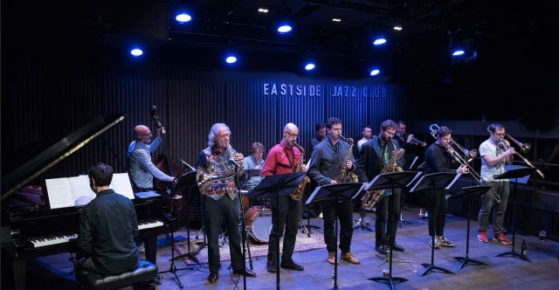 The tour celebrates the release of the new Pavillon CD The Freedom Of Movement (Three Worlds Records), with witty tune titles including See You Suddenly, Crout’n Confusion, and Oh Yeah, Great, Thanks. This last piece was inspired, Rattigan told the audience, by the thought of a younger generation inheriting a parched planet spoiled by environmental chaos. There could hardly be a more serious subject, but the title Oh Yeah, Great, Thanks, always seems to make people laugh, said Jim. Well, that’s irony for you.

Other inspired pieces from the new album, and the earlier release Strong Tea (Pavillon Records), included Sweet Tamarind – with a triple-time beat rushing headlong into a fast 4/4 – and Horn Call, with the ensemble on a thrilling musical knife-edge between control and chaos.

We really must hear much more of this band in the years to come.